Still reeling from the COVID pandemic and Russia’s invasion of Ukraine, the global economy is facing an increasingly murky and uncertain outlook, according to the latest report released on Tuesday by the International Monetary Fund (IMF).

The World Economic Outlook Update July 2022: Gloomy and More Uncertain, highlights the significant consequences of the stalling of the world’s three main economic powerhouses – the United States, China and the major European economies.

“The world may soon be teetering on the edge of a global recession, only two years after the last one”.

The baseline forecast for global growth is for it to slow from 6.1 per cent last year, to 3.2 per cent in 2022 – 0.4 per cent lower than forecast in the last Outlook update in April.

With higher-than-expected inflation – especially in the US and the largest European economies – global financial conditions are becoming tighter.

In the US, reduced household purchasing power and tighter monetary policy will drive growth down to 2.3 per cent this year and one percent next year, according to the outlook.

China’s slowdown has been worse than anticipated amid COVID-19 outbreaks and lockdowns, with negative effects from Russia’s invasion of Ukraine continuing.

Moreover, further lockdowns and a deepening real estate crisis there has pushed growth down to 3.3 per cent this year – the slowest in more than four decades, excluding the pandemic.

And in the Eurozone, growth has been revised down to 2.6 per cent this year and 1.2 percent in 2023, reflecting spillovers from the Ukraine war and tighter monetary policy.

“As a result, global output contracted in the second quarter of this year,” said Mr. Gourinchas.

Despite the global slowdown, inflation has been revised up, in part due to rising food and energy prices.

This year it is anticipated to reach 6.6 per cent in advanced economies and 9.5 per cent in emerging market and developing economies – representing upward revisions of 0.9 and 0.8 percentage points respectively. And it is projected to remain elevated for longer.

The report outlines some risks ahead, including that the war in Ukraine could end European gas supply from Russia altogether; rising prices could cause widespread food insecurity and social unrest; and geopolitical fragmentation may impede global trade and cooperation.

Inflation could remain stubbornly high if labour markets remain overly tight or inflation expectations are too optimistic and prove more costly than expected.

“In a plausible alternative scenario where some of these risks materialize…inflation will rise and global growth decelerate further to about 2.6 per cent this year and two per cent next year, a pace that growth has fallen below just five times since 1970,” said the IMF economist.

“Under this scenario, both the United States and the Euro area experience near-zero growth next year, with negative knock-on effects for the rest of the world”. 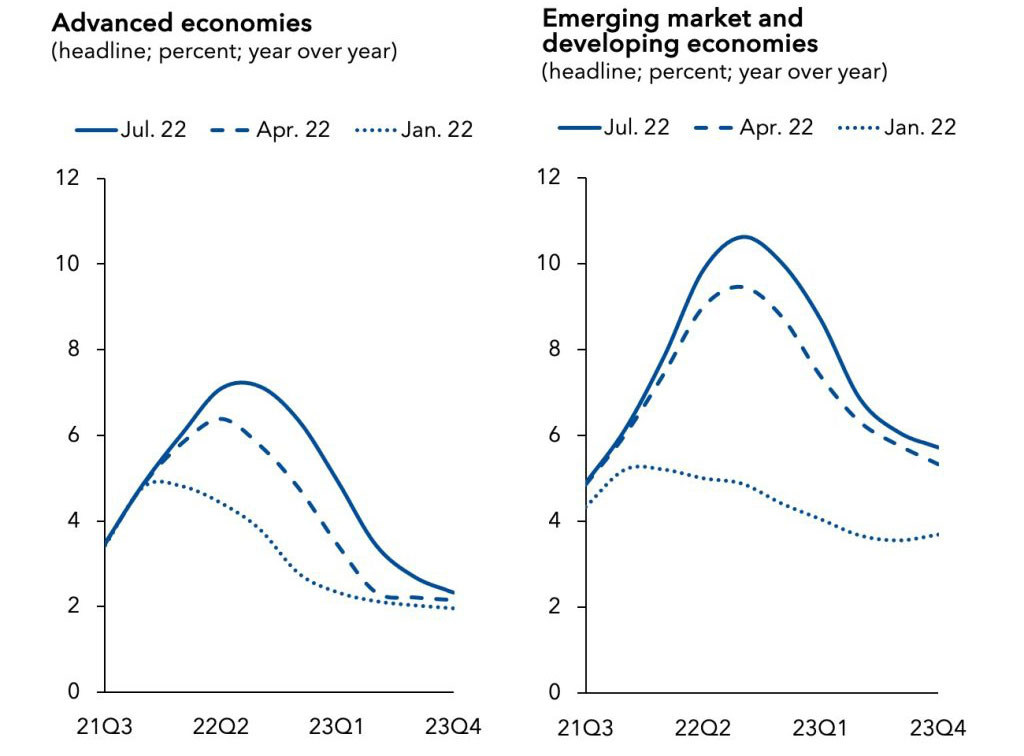 Global inflation has been revised up and is projected to remain elevated for longer.

Current inflation levels represent a clear risk to macroeconomic stability, according to the outlook.

Responding to the situation, central banks in advanced economies are withdrawing monetary support faster than expected, while many in emerging market and developing economies began raising interest rates last year.

“The resulting synchronized monetary tightening across countries is historically unprecedented, and its effects are expected to bite, with global growth slowing next year and inflation decelerating,” said Mr. Gourinchas.

While acknowledging that tighter monetary policy would have economic costs, the IMF official upheld that delaying it would only exacerbate hardship.

And hampered by difficulties in coordinating creditor agreements, how and whether debt can be restructured, remains unpredictable.

He argued that domestic policies responding to the impacts of high energy and food prices should focus on those most affected, without distorting prices.

“Governments should refrain from hoarding food and energy and instead look to unwind barriers to trade such as food export bans, which drive world prices higher,” advised the IMF official.

Policymakers are urged to ensure that measures are temporary and only cover energy shortfalls and climate policies.

Teetering on the edge

From climate transition and pandemic preparedness to food security and debt distress, multilateral cooperation is key, said the IMF economist.

“Amid great challenge and strife, strengthening cooperation remains the best way to improve economic prospects and mitigate the risk of geoeconomic fragmentation,” he underscored.